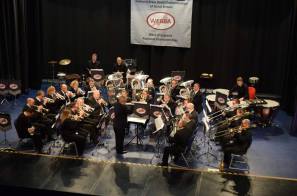 Historically brass bands grew up in the 19th Century around mining villages. In typically agricultural areas brass bands are thinner on the ground.

Their contribution to the social fabric of the nation, it's artistic and cultural development, and local communities, has been immense. They traditionally provide support at local events and importantly provide tuition to children in music.

In many cases bands have developed into virtuoso ensembles that perform at the very highest standard of music. They are the envy of the rest of the World for their role in society and their quality driven by the competitive element of contesting.

The County of Cornwall has produced many quality musicians and musical ensembles, and is home to brass musicians both active and retired that have performed, composed or conducted at the pinnacle of brass playing.

On the 13th July 2012 "Roche Brass" was formed with a core group of experienced players, based in this geographically central location, with the intent of maintaining the tradition of brass banding and to encourage local youngsters to become involved in the movement.

Youth bands are of the upmost importance when ensuring the future of brass banding. It follows then, that as part of the Roche Brass band organization it has already started a learner group and youth band, which has received strong and enthusiastic local support.